A synopsis of Jim Rickards, New York Times bestselling author of The New Case for Gold, The Death of Money, Currency Wars, The Road to Ruin, Aftermath, and the newly released The New Great Depression: Winners and Losers in a Post-Pandemic World with KeithMcCullough on Hedgeye.

Jim is the Editor of Strategic Intelligence, Chief Global Strategist for Meraglim Inc., former general counsel for Long Term Capital Management, and a consultant to the U.S. Intelligence community and U.S. Department of Defence. 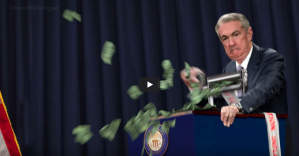 After a major pandemic it takes 30 – 40 years to get back to some kind of normalcy.

Pandemics aren’t new, and this one will be one of the worst in terms of deaths, but that in itself doesn’t necessarily sink an economy.

It’s the response in public policy, individual choices, and government officials responding to the pandemic that causes the economic damage.

The biggest single factor in this is the Lockdown.

Lockdowns do not work.

Lockdowns do not stop the spread of the virus but they do destroy the economy.

The choice of a lockdown will be known as one of the biggest public policy blunders in history.

Dr. Fauci is a bureaucrat. He is also an immunologist, but there are greater immunologists at the greatest universities saying that lockdowns don’t work.

President Trump handed the pandemic over to Dr. Fauci, who said he didn’t “do” economics but that’s nonsense.

There has been a flood of data since last spring that prove lockdowns don’t work.

In America they had individual states and mayors imposing their own rules on lockdowns.

The data now shows that it made no difference in case loads and fatalities relative to population.

But lockdowns do destroy economies.

Washing your hands makes sense. Social distancing makes sense. Data on wearing a mask is iffy but Jim wears a mask when he goes out shopping.

Those measures are low cost.

The lockdowns have killed more people than they’ve saved. Suicide rates have tripled, Murder rates have doubled. Alcohol abuse, drug abuse and domestic abuse are all up.

The anger, frustration and clinical depression are all rising steeply.

The virus isn’t a democrat or a republican. The virus just wants to kill you.

Don’t underestimate the amount that the lockdowns and isolation have contributed to the frustration, anger and violence over the past year.

Lockdowns will be remembered as the greatest blunder in history.

The Crisis of 2008 was a financial crisis.

What we’re in now because of the lockdowns is an economic crisis. They aren’t the same thing. You have to go back to the Great Depression for the right frame of reference.

It didn’t get back to its 1929 highs until 1954. It took 25 years to recover. Both Jim and Keith remark that money can be made individually during this time but the overall economy is devastated.

The kids of the Great Depression grew up and had their kids saving rubber bands and collecting newspapers (and scraping the butter wrapper). The idea of not wasting anything was inter-generational. It wasn’t until the Baby Boomers grew up that credit cards and debt became the norm.

When restaurants finally open up again, the ones that aren’t just closed forever, it won’t be in the same way. And it doesn’t mean people will want to go out for dinner. People are scared.

Airlines opening up again doesn’t mean that people will want to fly.

The happy talk by Wall Street and the White House about a pent up demand is not true. People won’t buy nine dinners in a restaurant at once just because they missed a number of them during the lockdowns.

There’s no pent up demand and half of those businesses are gone.

The stock market and the real world have never been more detached.

The S&P500 is really just the top seven companies – Facebook, Apple, Amazon, Netflix, Microsoft, Google, and Tesla, because they make up 40% of the index.

Small and medium sized companies are 50% of all jobs and 45% of GDP. They are being crushed.

Those small companies are bankrupt now and the storefronts are vacant. The employees aren’t technically unemployed because they aren’t looking for work. If you added those to the unemployment numbers then you have depression level unemployment.

There’s no legal limit on the debt so what’s the problem?

They’re talking about adding $6 trillion on top of a $2 trillion baseline budget deficit for 2021.

The US debt-to-GDP ratio will push 135% when they’re done.

What other nations are at that level? Lebanon, Greece and Italy.

MMT people say not to worry because the US prints dollars so they can’t run out of them.

It’s true, but it doesn’t mean that anyone will want those dollars.

But MMT is the policy of the Biden administration so get ready.

All of Biden’s cabinet picks are Obama veterans. Biden is not all there and is doing what he’s told. Who’s pulling the strings? In Jim’s opinion this is Obama who is looking to a Michelle Obama run for 2024.

The AOC and Bernie Sanders wing of the party has been pretty much run off the road.

The debate of having Universal Basic Income, health care for all, student loan debt forgiveness and childcare for all was shut down before because the government couldn’t afford them. With MMT there’s no debt limit.

Jim liked Trump’s policies but didn’t talk about it because anyone against Trump would throw a drink in his face and storm off (figuratively speaking). So with Biden Jim just says he doesn’t agree with it but this is what the Biden administration believes, so this unrestrained debt is what you’re going to get.

It’s important for investors to know what the policies are because the Democrats are in power today. There are major tax increases coming. The stated tax rates may not change but the amount you pay will go up because they’ll eliminate deductions.

The silencing of conservative voices by shutting down Twitter accounts (and YouTube/Facebook) reminds Jim of the purge that Stalin did in the 1930s. Once it was clear that Biden was getting in then they didn’t even pretend they weren’t doing it. There are anti-trust laws on the books that would stop this if the government wanted to use them. Big tech, big media and the Democratic party are all holding hands and deciding they’re going to crush conservative and populous voices.

Jim is an investor but not a trader. He only owns physical gold. He doesn’t own paper gold.

He knows people who get in and out of paper gold and he says that’s fine for trading but he just does physical gold.

The drivers of the price of gold are:

1. Fear due to political factors.
2. Supply and demand.
3. Interest rates.

Markets look at what they see coming about six months ahead and adjust their prices. But they always get it wrong.

Interest rates aren’t going to go up with the new stimulus cheques because half the economy is locked down.

Trump’s team developed the Covid vaccine and got it shipped out in record time. But the distribution got stalled because they can’t figure out who to give it to first. In New York it’s going bad before they use it.

With that and virus mutations the best case is a vaccine won’t have an impact until late 2021, and worst case it means a new mutation and starting over. That’s going to slam the economy worse.

When Wall Street wakes up to the recession then interest rates are going to go down and gold is going to go up.

You can’t beat something with nothing.

There isn’t anything ready to replace the U.S. dollar as the world reserve currency.

About  85% of all the reserve currency in the world is held in either U.S. dollars or in euro.

But nations don’t hold their surplus in currency. They buy securities to hold. Nations buy U.S. treasury notes. They don’t have pallets of $100 bills.

Gold is a form of money but it isn’t a form of fiat currency.

To see how the dollar is doing you can’t look at it against the euro, you have to look at the dollar price of gold.

All of the world fiat currencies are in the same life boat and they’ll sink or swim together.

Gold is money that is not in the life boat. By summer Jim expects the dollar to be weaker and the price of gold to be higher.

Gold does well in inflation but it also does extremely well in deflation.

Gold went up 75% in the Great Depression.

Gold is the only way out of the New Great Depression.

Jim explains why in the last chapter of his new book The New Great Depression: Winners and Losers in a Post-Pandemic World.