Part 1 of a synopsis of a webinar interview with Jim Rickards,  New York Times bestselling author of The Death of Money and Currency Wars, by John Ward and Alex Stanczyk from The Gold Chronicles.

A recording of the hour long webinar and full transcript will be available at Physical Gold Fund.

March 12, 2015 interview – please visit the website where the full webinar and transcript will be posted

The story in Greece is not over by any means.

There will be no Grexit and Greece will not leave the euro. They will not be forced out of the euro and will continue to use the euro as their currency.

If they were to leave the euro or to be forced out it would be catastrophic.

While Greece is a small country and their GDP is not large relative to the European Union’s GDP, their removal would see the market (which looks three or four moves ahead) look at the possibility of Spain leaving the euro, and Portugal leaving, and ultimately Italy and France leaving. 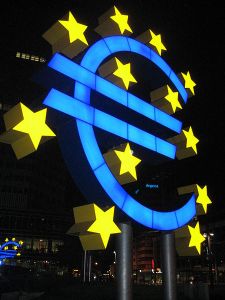 It would be a domino effect.

The problem with dominoes is that it’s not the first one falling that you worry about, it’s all the ones after it.

The idea that you could remove Greece without anything else bad happening is not true.

You can’t disturb one snowflake the wrong way without risking an avalanche.

That’s why Europe wants to keep Greece on board.

Greece wants to stay in the euro because if they returned to the drachma it would be inflated, which would steal their pensions and their savings.

Greek citizens have seen that movie over and over again in the last thirty or forty years, so they like the euro.

Leaving the euro would result in hyperinflation which would cause more social unrest than they already have. There would be no more Chinese investment coming into Greece, and no more ability to borrow money or roll over debts.

Greece would be reduced to a third world economy.

Get ready for a lot of fireworks but don’t read too much into it.

Bank depositors and bond holders have always been unsecured creditors, apart from deposit insurance and a small number of secured bonds.

For about eighty years, since the Great Depression, depositors have taken it for granted that there’s some kind of sacred obligation for you to get your money back from the bank, and that there’s no risk. That’s never been true.

Bond holders might believe that there is no risk because of the policy of Alan Greenspan, Ben Bernanke and now Janet Yellen that banks are “too big to fail.”

Fanny, Freddy, Citibank, JP Morgan, Goldman Sachs, Bank of America… you name it, no bond holder took a nickel of losses in the 2008 crisis, even though taxpayers bailed out the banks to the tune of trillions of dollars.

The US taxpayers bailed out the entire system in 2008 and have no appetite for that again.

The G20 finance ministers, the IMF, and the board of the governors of the Fed have come to the realization that we can’t afford this anymore. They are now saying that from now on bondholders, as well as depositors with more than the insured amount, will suffer losses.

We’ve seen bail ins in Cyprus and now in Austria.

Don’t be shocked to see this happen in the US and elsewhere. It hasn’t been policy but it has always been the law.

The leaders are transparently nontransparent — good luck finding it and if you do find it then good luck understanding it.

For example, in the working notes of the appendices of the communique of the G20 in Brisbane, Australia in November 2014, you’ll find blueprints for the bail in — and they actually use the word “bail in”.

There’s no mystery about it.

Get ready to lose money if the banks go down again, which is just a matter of time.

Gold in physical form, outside the banking system, is immune to a banking bail in.

It’s a good reason to own gold.

Jim has been saying since 2014 that the Fed would not and could not raise US interest rates in 2015.

He bases that on a few things:

1. Back in December 2013, Ben Bernanke started to taper QE. Janet Yellen took over in January 2014 and followed through with it. The tapering was based on the assumption that the US economy was getting stronger.

But by the end of 2014 the economy was already showing signs of weakness instead of strength.

2. The whole world is easing.

There have been twenty three central bank rate cuts in the past two and half months.

This is the currency wars on steroids.

And here’s the Fed, the lone central bank (with Switzerland in a separate category), saying they’re going to raise interest rates.

Guess what that does to global capital flows.

What does that mean?

It means the US dollar gets stronger because everyone is dumping emerging market currencies.

What does a strong dollar mean?

But the Fed’s goal is inflation and not deflation.

How does that work?

If you go down the path of raising rates then you will get a stronger dollar and you will get deflation. You will be defeated in your inflation role and may even have to cut interest rates later, which is a complete loss of face and loss of confidence.

The Fed governors have told Jim privately that they don’t know what they’re doing.

They could admit they don’t know what they’re doing, or they could go to QE4 in early 2016, but they don’t want to do that.

They’re between a rock and a hard place.

If he’s wrong and they raise rates then look out below. It’s just going to exasperate the trends described above. It would mean more deflation.

The Fed has said they will not raise interest rates until two meetings after they remove the word “patience” from their official statements.

If they want to raise rates in June they have to remove the word “patience” in March.

If they take out the word “patience” in March, but say they’re just watching the market, then the market will see that as a rate increase coming in June.

But if they don’t take the word out then the market will believe they can’t raise them in June and will start speculating about July.

The Fed keeps painting themselves into a corner. This is what happens when you manipulate the market. You have to keep manipulating in order to keep the whole thing from falling apart.

Jim’s gut says they won’t take it out but he isn’t making that as a strong predictions. They might take it out.

He does feel strongly that if they do take “patience” out then the dollar is going to spike strongly, the bond market will rally, and stocks will go down.

Corporate debt (not sovereign debt or currency debt) in emerging markets is $9 trillion US.

Emerging market companies can’t print US dollars but they owe US dollars. They earn in their local currencies but have to pay back their debt in US dollars.

What’s “the big short” today? The emerging markets have a $9 trillion short US dollar position. With derivatives it’s about $30 – $40 trillion US, no problem.

It looks a lot like 1997 to Jim, and what happened in 2008 might be small compared to what happens next.

The crisis in 1997 ended in August of 1998 with a default by Russia and the collapse of Long Term Capital Management, for which Jim was general counsel and negotiated the bail out.

Jim had a front seat on that event and knows how these things go down.

That crisis ended in 1998 but started in Thailand in 1997. If Yellen raises rates then it will be a snowflake that will ripple around the world. It has that kind of catastrophic potential.

Please visit link for Part 2 of the Webinar synopsis.

Artists see patterns using visual and musical ratios and fractals, and know all things in a closed system goes through the four seasons.

We’re coming into a global economic winter to be followed by a bright spring with new technologies and opportunities.

This site is for art and research purposes, and nothing is intended as individual investment advice.