A synopsis of an interview with Jim Rickards,  New York Times bestselling author of The Death of Money and Currency Wars, by Maria Bartiromo at Mornings with Maria on Fox Business, with Dagen McDowell and Jack Otter.

When Jim talks about the death of money he’s talking about the loss of confidence in paper currencies.

This has happened multiple times in the last hundred years: in 1917, 1939 and 1971. In the late 70s the US even issued bonds in Swiss francs — called Carter bonds — because no one wanted dollars.

Jim definitely recommends buying gold as a place to hide and a place for safety while stocks are selling off.  Have 10% of your portfolio in gold as insurance. Just 10%, not half and not all in.

Nobody wants their house to burn down, but heaven forbid it does then you’re glad you have insurance. If you send a cheque to the insurance company every month and your house doesn’t burn down then it’s lost money, but you’re glad to do it because that’s your hedge.

Have a slice of gold, along with things like stocks and bonds, cash and other assets.

People say gold has no yield. But if you take a dollar bill out of your purse or wallet and look at it, it also has no yield.  If you want a yield you have to take a risk.

Your stocks, bonds and other income producing products have that income in dollars. If people lose confidence in dollars then your income goes away. That’s happened three times in the past hundred years.

In a systemic collapse all currencies go bust at the same time, and that has happened over five thousand years of history. (In currency wars, which we’re in now, the only logical conclusion is systemic reform or systemic collapse, and sometimes both.)

Gold is up 400% since 1999 and up a couple of thousand percent since the 70s. But when people say it’s “up” they mean up compared to the US dollar.

If gold goes to $10,000 US per ounce, which Jim expects, then he thinks of it not as a rise in gold but as an 80% collapse in the US dollar — which has happened before.

The start of a rise up to $10,000 per ounce could start tomorrow and it could start in about three years from now. The point is that the U.S. has an unstable financial system and we don’t know when it’s going to collapse, but collapse is inevitable. That’s the easy thing — you can see it coming.

Having insurance and protection is a good decision and not “fear preaching”.

They have one-third land, one-third fine art, and one-third gold. Plus a little cash aside for the yacht and helicopter.

Gold is different than other commodities — it’s a hedge.

Think of it as money. If you want some money have gold.

Jim believes crude oil will trade between $50 – $60 per barrel — with overshoots on either side.

Saudi Arabia controls the price of oil because they have the lowest costs and the largest reserves. They could raise the price by reducing the supply but they don’t want to do it.

Last year they asked themselves, “What price would put the frackers out of business but doesn’t hurt our fiscal situation.” The answer is $60.

It doesn’t mean they can stick to the landing, but that’s the number.

It will take another year to bankrupt the frackers so we should see the price between $50 – $60 until the end of 2016.

The BIS (Bank of International Settlements) has shown there are $5 trillion of junk debt in equities. Where did all this fracking come from? They had to raise money to drill it.

The glut of oil in the market from frackers right now is temporary because fracking has a short life. For the short term the frackers are pumping more to pay their bills, but in the long run most will go bankrupt.

Gold is $1,133 US per ounce again today after jumping up and down a bit.

A deer visited the herb garden in a storm. It made me think of my photographs of gold in the wild, so gold in the thyme made perfect sense.

I performed at a house event last night — Six Feet, Hallelujah, Not Much of a Holiday, Heart of Gold and a few others. There were people from all over the world. The interesting thing is that after singing about economics for a few years I can definitely see an interest rising in the lyrics now.

I’ve avoided singing my economic works in public, just on recordings. But people are noticing that changes are going on in full view, and they want to know what’s happening. They’re interested in more than songs about love — they’re feeling the world changing. We’re all feeling it. It’s the game of Coins and Crowns and we’re getting closer to the pendulum swinging back.

Today is guitar, gold and history research, yoga, weights, hiking and sitting at a deserted lake, and reading Gold and the Gold Standard by Edwin Walter Kemmerer. Plus, I’m now adding gold to this: 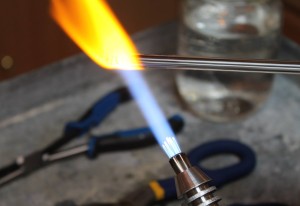 When I melted my first gold in the flame yesterday I knew I was home again.

Fusing gold with glass is heaven.

I apprenticed as a goldsmith with a Canadian gold guru, Peter Spence, whose son, Doug Spence, founded the Canadian company Spence Diamonds. The metal was melted in a crucible and forced into a wax mold with a centrifugal swing, then I polished it to gleaming. I wear a small gold heart that I smithed back then. I’ve loved gold through my life and studied it in a monetary sense for fifteen years.

My three loves are music, publishing and gold. I’d probably add a love of the esoteric to the list. A chat about physics will do. I’ve now studied and worked with the first two, and had put a hold on the third for the right moment. It’s beautiful now to be creating art with music, fire, glass and gold.

About the Greek bank holiday and long lines to get a few euros for the day. Debt deals behind closed doors. The media telling us what opinions to have. China building islands in the South China Sea and claiming the waves. More dealing to come. More standing in line for those who owe. Who’s next? There’s a long line of nations in debt and this is far from done.

When a nation leaves a gold standard or sound money and borrows to go to war hunger goes up, hope goes down, anger goes up, then it all goes down.

See the bankers wave their Wall Street wands and conjure piles of paper green. They’re making bets that the market will lose. Naked short selling is like betting that your neighbour’s house will burn down. And it happens to burn down. If they win we lose the whole world as we know it. I wrote this in 2009, with a lyric “A little grease (Greece) is floating out to sea and little pigs (Portugal, Italy, Greece and Spain) are bobbing up and down, they’ll send a storm then we’ll see, when the tide goes out who’s naked on the beach“, and it’s coming on now. The world is changing as we know it.