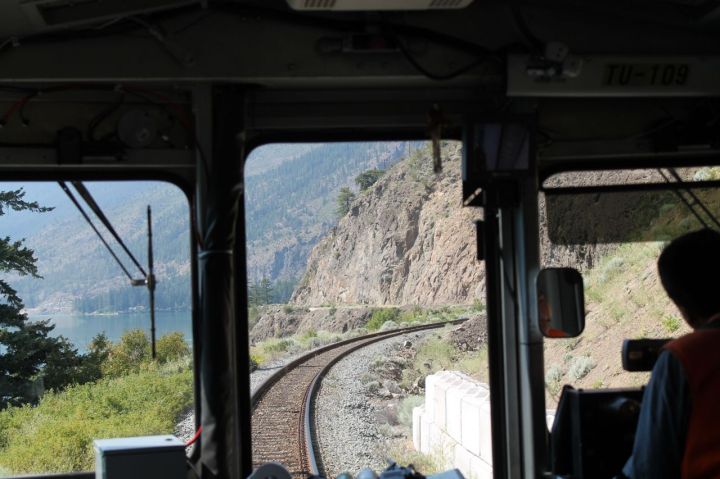 A synopsis of an interview with Jim Rickards, New York Times bestselling author of The Death of Money and Currency Wars, by Edward Harrison at RT Boom Bust.

On April 30, 1900, a railroad engineer, Casey Jones, was driving his passenger train, the Cannonball Express, on a midnight run from Tennessee to Mississippi. Jones started late and tried to make up time by running the train as fast as he could. At 3:52 am, Jones and the Cannonball crashed into a freight train that had stalled and was blocking the main line.

Posting a tweet using the metaphor of Casey Jones,  (who saved the passengers’ lives but died while trying to slow the train and avert the crash), means we know what the Fed wants to do, but whether they can do it is a separate issue.

What the Fed wants to do, and they told us in December, is to raise interest rates 300 basis points over the next three years.

Raising rates 100 basis points per year in small increments, which would be 25 basis points at every other meeting, a slow tempo, would be their preferred path.

So based on what they said in December, and with the December interest rate hike, you would expect that they will raise interest rates 25 basis points at the March meeting coming up very soon.

Yet markets seem to have discounted the possibility of a rate hike in March.

The Fed Funds Futures Market isn’t really a prediction of the market, but it gives you a spot aggregation of opinions in the marketplace. It’s very volatile and can change quickly.

Right now the Fed Funds Futures Market is saying that in no way will the Fed raise rates, and yet in December the Fed said they were going to raise rates, and that you should expect a 25 basis points raise in March 2016.

Picture Casey Jones on the Cannonball Express going one way and another train on the same track that’s in the way. What happened in the 1900s is that they crashed into each other, and unfortunately the engineer, Casey Jones, was killed.

What’s going to happen this time?

There are three possibilities:

1. Janet Yellen and the Fed will back off, be guided by the market, and not raise rates.
2. They will signal to the market they are raising rates, so expectations will have to adjust very quickly.
3. They will raise rates and the market won’t adjust — and you’ll have a train wreck.

The train wreck possibility can be very damaging for stocks.

You could have a shock on March 16th in which markets very suddenly and instantaneously will have to reprice for an event they weren’t expecting.

That’s the train wreck, and we could see a significant draw down in stocks as we did last August, and in January and all of February.

The question really is, “Will the Fed raise rates in March?”

Right now it’s Jim’s view that they will.

That’s not what the market is saying and not what a lot of commentators are saying, but Jim’s going by what the Fed said in December.

In January they talked about some concerns, but they’ve given us no reason to think they won’t raise rates in March.

The economy is probably on the edge of a recession anyways, and a couple more rate hikes is all it will take to put the economy in a recession. They raised interest rates in December and Jim said that was tightening into weakness, and that it was a blunder.

The question is, “Why are they tightening?” The Fed’s not supposed to tighten into weakness, they’re supposed to ease in weakness and then tighten when the economy gets too hot.

The problem is that Jim’s looking at real economic data, which looks pretty weak to him and others, and the Fed is looking at models. They’re looking at models that tell them that when employment is as low as it is, and job creation is as steady as it is, that you shouldn’t expect inflation right around the corner.

When will the Fed get it that the U.S. is heading into a recession? Jim think they’ll get it around the summer. So he thinks they’ll hike in March, probably again in June, and then by fall they’ll pause. 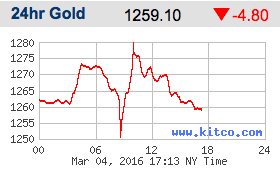 Gold has been rising over the last month, as more people become uncertain about what’s going on and want some insurance against the unknown. But today it freaked out along the way, as the price is manipulated at the same time as more and more people are looking to “buy the dip” on the way up. So it drops and then shoots up, which shows there are people watching the price really closely.

Here it is over the last month: 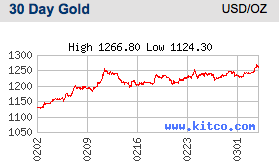 I’m not a speculator, as I’ve said before. I’m looking at theories and patterns of empires rising and falling, how those with power in small and large relationships manipulate conditions to try to keep it. Whenever there’s been a change in technology and a shift in the balance of power things gets uncertain. Those in power hate to lose it. Those without it want it. In the past having physical gold helped preserve wealth while the world went crazy and sorted a new balance out. It has been a bit of an insurance policy.

For me gold is more than that. Gold is symbolic for what we as a society feel is valuable. And value takes on many forms.

Gold is a symbol for security, quality and beauty.

Gold as money means it’s a medium of exchange as opposed to a value itself which rises and falls in value — there is no yeild. Gold as commodity means it is the thing that has value — having yeild. Gold is both, as well as being symbolic.

On top of that, as a goldsmith, it’s gorgeous to work with. Beautiful, fluid, malleable, sweetly shining and substantially heavy.

I songwrite about its symbolic value, smith it for the beautiful tactile value, and own it for its monetary value.

Whatever your reason for caring, there’s an economic winter on its way and gold is a revelator, a balancer of all sociodemographic groups. And 10% tucked away in physical gold is insurance in a storm.

This one is just a little Bluegrass tune. No deep lyrics here. No, none at all.

It will eventually have the full bluegrass band and harmony, but for the demo it’s just me and the guitar on the chesterfield. Pops and all.

Hawk and a Dove

Hawk and a Dove

The Greek bank holiday and long lines to get a few euros for the day. Debt deals behind closed doors. Another knife and another one resigns. The media telling us what opinions to have. China building islands in the South China Sea and claiming all the international waves. More dealing to come. More standing in line for those who owe. Who owes? There’s a long line of nations in debt and this is far from done.

Preparing for the Fall live boutique album is available on iTunes — featuring Wag the Dog, Black Swan Dive,  American Pie and Gods of the Copybook Headings.