A synopsis of an interview with Jim Rickards, New York Times bestselling author of The Death of Money and Currency Wars, by Ameera David and Edward Harrison at RT Boom Bust.

The U.S. dollar has gained a little bit of strength lately, after showing a little weakness in the last several months.

This is a feedback loop.

It goes back to May 2013 with “taper talk”. The Fed has been tightening and easing policy, not by raising rates (we’ve had one increase in the last eight years or so), but by just talking about it.

The Fed sends out Regional Reserve Presidents to talk hawkish, then the dollar goes up. Conditions tighten and the market goes down. The Fed gets frightened and then they don’t raise rates, which is then viewed as a form of ease relative to expectations, so the dollar goes down again.

As the dollar goes down gold goes up, oil goes up and the stock market goes up.

Then the Fed starts getting hawkish again because the situation has eased, like what happened in February, March and April when the dollar was getting weaker.

So you just have this circle between the markets and the Fed. They’re each watching the other to make the next move.

This has been going on for three years at this point, starting back with the original taper talk by Ben Bernanke in May 2013, which almost sank the emerging markets.

How is gold doing?

What gold does depends a little bit on what the Fed does.

All it would take is a Fed rate increase and a stronger dollar to throw the U.S. economy back into a borderline recession.

Jim doesn’t think there will be a rate increase, but he’s open to the possibility and so is watching it closely.

He doesn’t think they will raise interest rates, mainly because of the international spill over effect — for example more Chinese flight of capital.

Even if the Fed did raise rates and it brought a lower price for gold, it would just be a better entry point for buying the metal, because the Fed is going to have to cheapen the dollar by something like 20% just to keep the U.S. economy going.

That’s what the currency wars are all about.

Ed pointed out that China’s demand for physical gold is up 700% since 2010 and that China buys about 40% of all the gold that is produced every year.

China knows that inflation is coming and that the international monetary system is highly unstable.

The Chinese reserve position has come down from a little from over $4 trillion to about $3.3 trillion. Most of that is denominated in U.S. Treasuries.

The U.S. dollar has no greater friend than China. If I owed you $3 trillion in U.S. dollars you’d want a strong dollar too.

China is looking at the U.S., and the only way out for the U.S. is with inflation, which is going to diminish the value of the Treasuries.

Why doesn’t China just dump the Treasuries? They can’t.

The Treasury market is deep and liquid but not that deep and liquid. If they dumped them it could become disruptive very quickly and the President could stop it.

So what can China do if they have $3 trillion in Treasuries and can’t dump it?

If the U.S. weakens the dollar in order to get inflation and make the Treasuries worth less, which Jim expects, then their gold will be worth more.

If the U.S. maintains a strong dollar, which would probably kill both economies, the gold won’t do very much but the Treasuries will keep their worth.

So by buying gold China is just creating a hedge position.

It’s not just the Chinese buying gold. Russia’s economy is 1/4 the size of China, so they don’t need as much as China to hedge, but they’re also buying enormous amounts of gold.

Iran, Turkey, Russia, Mexico — people all over the world are buying gold.

It’s the only way out. There’s too much sovereign debt. Too much debt and not enough growth leads to currency wars.

If the U.S. can’t get the growth there’s no need to default on their debt — they just print more dollars.

So if you’re not going to default and you can’t grow your way out of debt then what’s the answer?

The answer is inflation.

But just because the Fed wants inflation doesn’t mean they can get it.

They’ve got deflation coming at them because of demographics, technology and deleveraging. So they have to try harder!

They’ll get the inflation eventually, and when that happens then expect the price of gold to skyrocket.

Gold is a store of wealth and it’s one way to preserve wealth.

If you’re in dollar denominated assets you’re going to get wiped out.

They are all fiat and they aren’t backed by anything, except for one thing — confidence.

If people have confidence that it’s money then it’s money.

How strong is the confidence?

When you’re looking at the different forms of money just ask yourself which creates the most confidence. 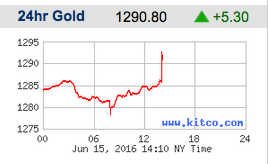