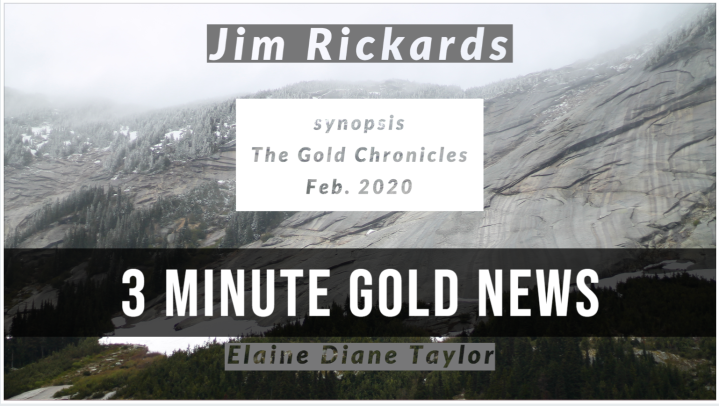 A synopsis of Jim Rickards, New York Times bestselling author of The New Case for Gold, The Death of Money, Currency Wars, The Road to Ruin and Aftermath with Alex Stanczyk from The Gold Chronicles February 2020 vidcast.

MOST IMPORTANT EVENT OF 2019

Sometimes an event is off the radar and takes a year or more to gain its complete magnitude.

The spike in Repo interest rates last September, and the Fed’s response ever since, was the most significant event of 2019.

“Repo” is short for a financial tool called a Repurchase Agreement.

With a Repo I have some good collateral, like U.S. Treasury securities, and I need some cash, so I borrow the cash from you for a short time, like overnight, a week or a month, and I send you the security as collateral.

I pay interest and buy them back, or re-loan them (a rollover) at the agreed on short term period.

Dealers buy Treasuries, use them as collateral to borrow cash, and then use the cash to buy more securities.

So there’s a pyramid of purchasing agreements out there.

Last September there was a huge spike in the Repo interest rate.

There was a need for cash by hedge funds, institutions and smaller banks who were pledging their collateral, but the big banks weren’t lending to them.

So there was a mad scramble for cash, bidding up the Repo interest rates.

The Fed only deals with the big banks, so they printed money (out of thin air) and bought the big bank’s Treasury securities, which gave the banks cash.

They lent to the banks so the banks would turn around and lend the cash to the smaller customers.

So the Fed was giving the big banks cash and taking in short term 30-day and 60-day Treasury bills.

The Fed has printed trillions of dollars over the last ten years so why is there a cash shortage?

Their lending and the leverage created since the 2008 crisis exceeds the trillions they printed. By many multiples.

So the Fed printed even more last fall to get cash out there to the banks so the banks would lend to the market.

But the banks didn’t lend.

They said, “Thanks for the cash!” and then deposited it with the Fed as excess reserves.

So not enough cash has been getting out into the market.

Then overnight lending became a week. Then a one week loan became a two week loan.

Now the amounts are more than ever and the times have been extended and the Fed can’t reduce it.

The Fed could unwind it over the 30 or 60 days by just not rolling the loans over, but they’re not and they can’t.

1. It came as a surprise to the Fed
2. There was some kind of stress behind-the-scenes
3. They can’t stop.

The Fed was raising interest rates in order to normalize things and get ready for the next recession.

Then he cut interest rates and stopped the QT the Fed was doing.

There’s been three rate cuts since, there’s no hikes on the horizon, and they’re increasing the lending.

A complete failure to normalize their balance sheet.

The Fed have painted themselves into a corner and can’t get out.

They can’t raise interest rates and get things back to where they have a cushion for the next recession, without creating the recession they want to prep for.

The Fed has two problems:

1. Bad forecasting
2. Staying too long when they’ve got it wrong

The debt is growing faster than the economy.

So at some point there’s going to be a debt crisis.

Jim believes the Fed won’t cut interest rates in March, but will cut them in either April or June.

There are signs of a slowdown because of global factors and the impact of the corona virus, COVID-19, but they won’t cut from July through November because it’s too close to the U.S. election.

The rate cut will give the stock market a little boost and give gold a boost.

But with financial technology, fintech, those in power won’t let it disrupt the current models.

The banking system itself is always tightly controlled.

With war, you’re out to destroy the productive capacity of your enemy or else take it over for yourself, and turn it to your own use.

What if I could either destroy the productive capacity of my enemy, as in Iran, or else take it over and use it to my own use, as China is attempting to do with the Belt & Road Initiative?

If you could do it with money you wouldn’t really need an army, except for defence.

Just take over the financial system.

For example, Germany has taken over Europe financially without invading. That’s what the euro is and what the European Union is. Germany dominates the economic relations in the eurozone.

Nothing happens without Angela Merkel, the Chancellor of Germany.

They aren’t going to let a new fintech blockchain come in and disrupt their system.

There will be digital currencies created by the central banks.

The U.S. dollar is mostly done through digital means now.

But the financial powers, like the IMF and central banks, will come up with their own cryptocurrencies and destroy their rivals.

The world will evolve into a cryptocurrency blockchain system but Jim does not believe it will disrupt the current banking system.

The central bankers would love to get rid of stacks of cash and go digital.

The only form of wealth they can’t get rid of or control is physical gold.

Mark Zuckerberg of Facebook tried to bring out his own digital currency, and a year later it’s now dead in the water.

Alex Stanczyk points out that he watched Zuckerberg talk to the US Congress about Libra, and it was a giant wake up call for those in power to the risk of cryptocurrencies that aren’t under their control.

They are now motivated to create their own.

Jim notes that if Libra was set up then if he sent Zuckerberg cash in exchange for Libras, Zuck could use that money to buy Treasuries and earn interest , while the Libra’s don’t make Jim anything.

Another name for that is a “bank”. 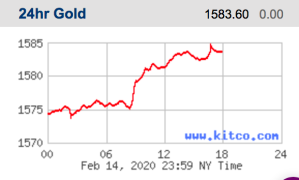